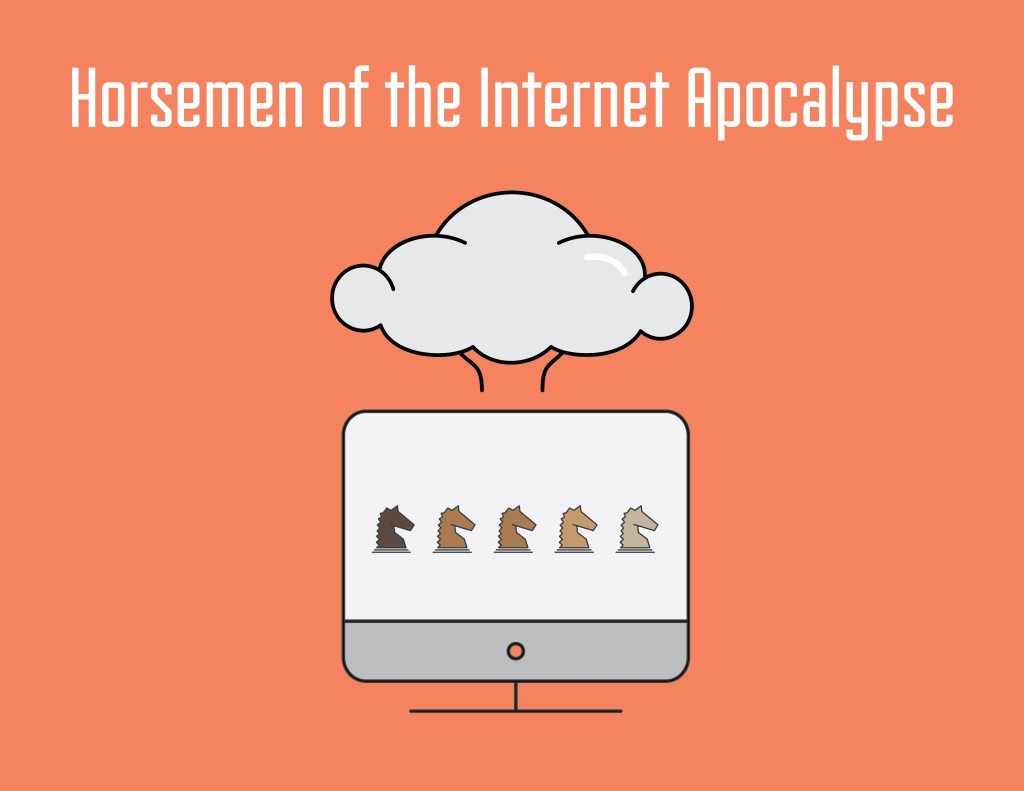 I’ve been immersed in the cybersecurity market and media front for a good stretch. Over time, I’ve had an opportunity to work with some of the most brilliant minds and young-gun “hackers” in cybersecurity (I’m not a name dropper, so I’ll refrain from using them as SEO-bait). I’ve watched attackers evolve from basement-dwelling teenagers to organized intruders to APTs.

The most recent attack-flavor of the day is, of course, ransomware — a nasty malware strain wreaking havoc on the healthcare industry. And, at one point or another, I’ve met vall Five Horsemen of the Internet Apocalypse: Scam, Extortion, Embarrassment, Theft and Death.

There are, of course, already thousands of stories detailing the fragility of our online lives and businesses. If you were at the DevOps.com Rugged DevOps event on opening day of the RSA Conference this year and caught the presentation by Wired cybersecurity and privacy writer Kim Zetter, “2015 — The Year in Hacks,” then you had a chance for a great overview of some of 2015’s biggest digital crimes.

With an ear to the ground on everything the NSA and the most prevalent APT-using hackers are guilty of, @KimZetter never fails to intrigue readers and live audiences. Whenever you read her stories or listen to her speak, you always come away reassured that when all the smoke and headlines clear, the great deep-down reality is that everything we digitize is subject to the whim of the Five Horsemen of the Digital Apocalypse — Scam, Extortion, Embarrassment, Theft and Death.

Kicking off her talk was what she is calling the biggest hack of 2015 — the one that successfully targeted the United States Office of Personnel Management (OPM). The full extent of the damage that allowed attackers to steal personal information on millions may never be known. What we do know is it exposed everything from the identities of covert US operatives to family members listed on security clearance forms to anyone who has ever applied for a job with the federal government. The one lesson from this event that is a “for sure” is that, even after decades of security product development (with more than 800 available for review at RSA), the cybersecurity industry still lacks much needed innovation.

“Men behaving badly.” @KimZetter pegged the Ashley Madison data theft as the most brazen hack of 2015. With 30-plus gigabytes of account information stolen and dumped, log-in credentials for 32 million accounts purloined, credit card transaction information accessed, and even several suicides tied to the incident, the hack again reminded us that the great deep-down reality is that everything we digitize can be used by attackers to scam, extort, embarrass, steal and even kill us.

Some might argue that Embarrassment made a special appearance at Ashley Madison but the fact that suicide was an outcome of that hack leaves me to conclude that Death was likely the lead actor there. Anyone at the presentation would agree that Embarrassment really stole the show in the hack of CIA Director John Brennan’s AOL email account. Allegedly perpetrated by a teenager, this Wired senior writer describes the incident more deeply in her October story: Teen Who Hacked CIA Director’s Email Tells How He Did It

Anyone reading this may be walking away with a rather pessimistic view of our chances of remaining secure online. But even so, the existence of determined hackers should do no more to deter individuals or businesses from going online than road rage should to prevent anyone from getting behind the wheel of a car.

If we can learn any lesson from the news articles penned by @KimZetter and her peers, it’s that we should continue to take full advantage of the Internet but to also take the time needed to apply effective security.

In addition to reading this article on our blog, you can check out Joe’s new column on DevOps.com here

Tech Journalists Report on the Best Way to Work With Them – Observations From Tech Reporter Panel
With Philanthropy as a Core Value, Club Phil is How Bhavans Give Back: Part 2
It's Teacher Appreciation Week: How Our Favorite Teachers Inspired Us
With Philanthropy as a Core Value, Club Phil is How Bhavans Give Back
How to Choose Between Blog Posts and Contributed Articles
Four PR Tips for Gaining Mindshare in Artificial Intelligence
Bhava and PRSA Co-Sponsor Timely ‘Diversity, Inclusion & Women in Tech’ Media Event at The Battery
The Journey to B2B Tech PR Via a Pitstop in Politics
How to Have Your Cake and Tweet it Too: A Practical Guide to Balancing Your Personal and Professional Voices on Twitter
What the Smash Hit Musical Hamilton Can Teach You About Working in Enterprise Tech PR
Reflecting on a Gold-Medal Year at Bhava
Rockin’ Around the Bhava Tree: How We Spend the Holiday Season
The Metagraphic: An Infographic on How to Make an Infographic
Digital Transformation Top of Mind at PagerDuty Summit 2016
One Giant Step for Open Hand
Brace Yourself… Conference Season is Coming (Well, It’s Already Here)
From Political Science to Public Relations
The DevOps Force Multiplier: Competitive Advantage + Security
The Five Ws of Pitch Worthy Press Releases
Seven Legit Ways to Hit it Big in Vegas with Your Black Hat News
I Am Twitter and So Can You!
Top 10 Areas of Mastery for a Successful PR Campaign
Bhava Means Business .... Press
In Rugged DevOps, Actual Human Interaction Really Matters
Murphy’s Law Comes to DevOps: Is Security Wreaking Havoc?
Bhavans Love Summer
How I Went from Milking Cows and Pruning Fruit Trees to Writing Press Releases
5 Steps for Slideshare Success
Bhavans Share and Shop at Annual Freecyle Event
What Bhava’s 30x30 Workout Challenge Taught Me About Myself, My Teammates and Friendly Competition
Writing for Infographics
A Day in the Life
How to Explain to Your Friends & Family What You Do: A True Tale of the Struggle Faced by Those of Us in PR
Helping Tech Marketing Answer “So What?”
A Day in the Life
“Yes, And!”: 3 Ways to Harness Improvisation in Business and Your Life
Putting Bhavans on the Map
How to Write a Great Article
Design, Development and Writing? Sign Me Up.
Emeryville: One of the Other Cities by the Bay
Why Iteration Is a Designer’s Best Friend and Not the Enemy
5 Ways to Generate Buzz at a Conference Without a Booth
7 Breakfast and News Combos for a Perfect PR Morning
Hello. My name is Chelsea and I am Content Specialist.
Bhava’s “Unofficial” Fitness Challenge of Summer 2014
Finding Harmony as a PR Pro: 3 Tips to Make It Less Elusive Than You Think
Content + PR + California = A New Chapter in the Bay Area with Bhava
How to Articulate Your Goals and Achieve Them
5 Tips to Expand Your Company’s Brand Presence on LinkedIn
The 7 Steps That Can Solve Any Creative Problem
The Download: Bhava Design Internship
Persistence Pays Off When You’re Looking for the Perfect PR Job
My Golden Ticket to the 2013 HOW Design Live Conference
Shedding Light on the Art of SEO
Scan this: Tips for implementing QR codes in a marketing campaign
Design Hacking: A Design-a-thon
Mind the Gap: The Importance of Cross Platform Design for Attracting and Retaining Customers
Make Google AdWords Work for Your Business Without Burning a Hole in Your Pocket
Bhava Color Run
How To Create Great Online Video Interviews for Business
Marketo User Summit 2012: Getting a Closer Look at What Works
Three “Zen Workplace Habits” to Help Navigate Change
PR in the Field: A Glimpse of SuiteWorld
13 Rules for Taming the Email Monster (We Call Ours Raul)
UX vs. SEO or UX plus SEO?
How We Became Bhava
Archive
TOP