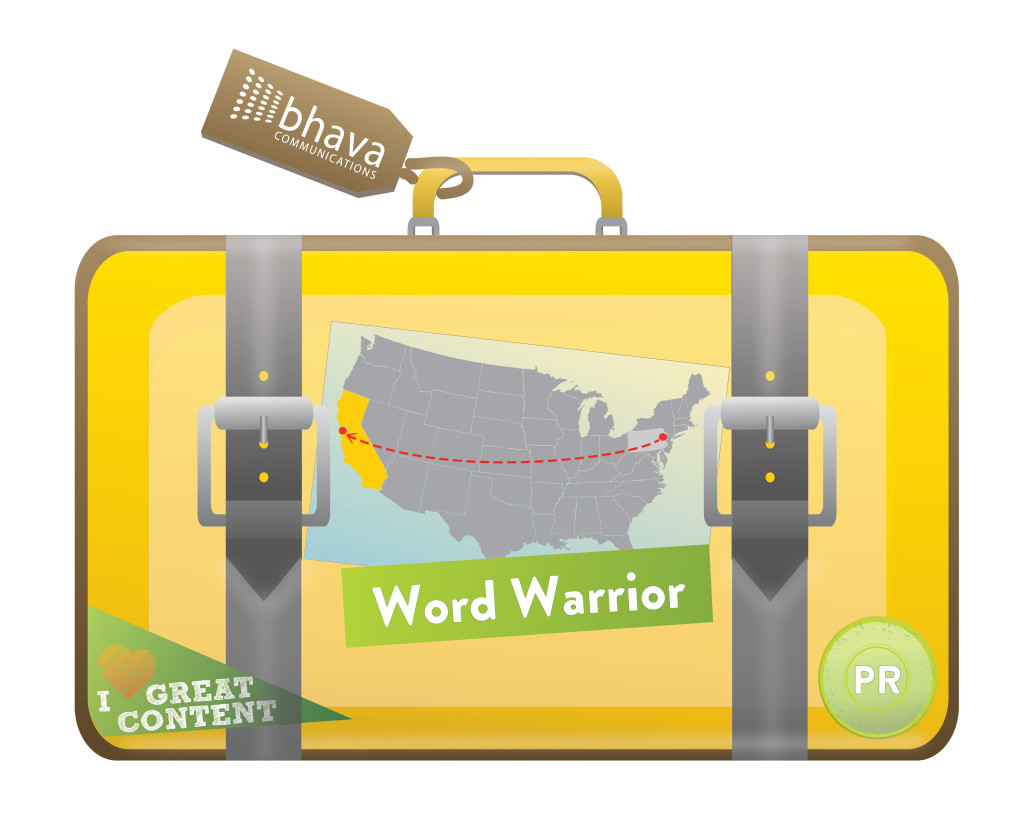 Earlier this year I parted ways with my beloved hometown of Philadelphia and bought a one-way ticket to San Francisco. It was a move 10 years in the making, because as much as I wanted to live in California, that’s how long it took to be ready to leave everything I had ever known.

Over that time, I thought of just about every question involved with relocating across the country: What am I going to do for a job? Where am I going to live? How am I going to make friends? How am I going to find my way around? Will I be able to stay in touch with everyone back home? Will anyone come visit me? What if it’s not at all what I think it will be?

Despite the risks and unknowns, I took the leap because I felt like my jar of memories in Philly was filled. I had carved my path. I found my discoveries. That chapter was written and it was time to start a new one.

Bhava is a big part of that new chapter. Joining Bhava goes beyond just erasing a question mark from my relocation equation. It’s a fundamental reason why I feel at home in California and why this experience is the challenge and adventure I was looking for.

Plunging Into the Bay

The San Francisco Bay Area wasn’t even high on my list when I started seriously considering where to live in California. Like many East Coasters who had just experienced the coldest winter of their life, the warm sunshine of Southern California was pretty tempting and I figured I would base my decision on the weather. Then I learned just how intoxicating the Bay Area is with its mix of culture, innovation and entrepreneurialism. It began stealing my heart when I became acquainted with Bhava, whose office sits just east of the Bay Bridge.

The first time I traveled over the bridge I was in an Uber on my way to interview with the agency. That Friday morning was wrapped in the arms of Karl the Fog (yes, San Franciscans have a name for their fog) and when I arrived, the energy—and bright yellow walls—inside Bhava was instantly sunny. After spending the morning with several Bhavans, I could see that the agency is a microcosm of the Bay Area spirit and drive I was hoping to be a part of.

I joined Bhava on a mission that’s defined my career and life passion: writing stories that matter to audiences. When founder and CEO Liz Zaborowska launched Bhava Communications in 2009, part of her vision was to develop a new way of integrating marketing with public relations using great content as a driver of results and lift across campaigns. We share that worldview and I quickly knew I’d found my flock.

Some agencies are attempting to raise the bar of their content offerings by hiring career journalists. Others are trying to embrace the “integrated marketing and PR” mantra even though they don’t have experts in one or the other function on their team. Bhava was built from the start to successfully connect the world of content with the world of PR, and that’s one of the many things that attracted me to join as Director of Content.

Since its inception, Bhava has developed high-quality, newsworthy content that plays a symbiotic role with PR. We fill what we call the “imagination gap”—that disconnect between the magic of what tech companies are inventing and the non-inventive ways in which they describe them. Organizations in Silicon Valley and beyond are rewriting business playbooks and disrupting marketplaces, yet many companies struggle to express why it matters to their core audiences.

The best way to bridge this gap is with great content.

What does great content look like? It engages and educates customers, media and other influencers. It provokes discussion and creates perspectives. It drives decision making. The thing is, you can’t fully achieve those outcomes unless you have a team of A+ content pros who at once understand the technology at hand, can get inside the head of a tech executive, know the target audience and can accurately match a value proposition with a business need.

At Bhava, I’m surrounded by a team of inspiring people who’ve mastered this work. We believe PR and marketing success for our clients should not be defined merely by some number of media hits and sign-ups. It should be defined by how well and how fast a company meets its business objectives to achieve and sustain leadership in its category. That’s why our tagline is “We build category leaders.” It’s the status we help our clients reach, and it’s a standard to which we hold Bhava, as well.

Whenever I talk to people about relocating to California, nearly everyone says it takes a lot of courage to pick up and move so far away from family and friends. But even that hasn’t been the biggest challenge in this whole journey. Nor has it been the time spent packing up boxes, finding an apartment in the competitive San Francisco housing market, updating my address in dozens of places, getting to know the city streets or even making friends. All that stuff sorts itself out.

The biggest challenge is filling this chapter with so many new experiences that I’ll run out room on the pages. But I have no worries that Bhava will help get me there. For anyone else who’s anxious to start their own new chapter, when you’ve approached the edge and you’re good and ready to dive in, make sure you go head first and keep your eyes wide open. I hope you’ll find as much reward where you land as I have.

Tech Journalists Report on the Best Way to Work With Them – Observations From Tech Reporter Panel
With Philanthropy as a Core Value, Club Phil is How Bhavans Give Back: Part 2
It's Teacher Appreciation Week: How Our Favorite Teachers Inspired Us
With Philanthropy as a Core Value, Club Phil is How Bhavans Give Back
How to Choose Between Blog Posts and Contributed Articles
Four PR Tips for Gaining Mindshare in Artificial Intelligence
Bhava and PRSA Co-Sponsor Timely ‘Diversity, Inclusion & Women in Tech’ Media Event at The Battery
The Journey to B2B Tech PR Via a Pitstop in Politics
How to Have Your Cake and Tweet it Too: A Practical Guide to Balancing Your Personal and Professional Voices on Twitter
What the Smash Hit Musical Hamilton Can Teach You About Working in Enterprise Tech PR
Reflecting on a Gold-Medal Year at Bhava
Rockin’ Around the Bhava Tree: How We Spend the Holiday Season
The Metagraphic: An Infographic on How to Make an Infographic
Digital Transformation Top of Mind at PagerDuty Summit 2016
One Giant Step for Open Hand
Brace Yourself… Conference Season is Coming (Well, It’s Already Here)
From Political Science to Public Relations
The DevOps Force Multiplier: Competitive Advantage + Security
The Five Ws of Pitch Worthy Press Releases
Seven Legit Ways to Hit it Big in Vegas with Your Black Hat News
I Am Twitter and So Can You!
Top 10 Areas of Mastery for a Successful PR Campaign
Bhava Means Business .... Press
The Five Horsemen of the Internet Apocalypse — Scam, Extortion, Embarrassment, Theft & Death
In Rugged DevOps, Actual Human Interaction Really Matters
Murphy’s Law Comes to DevOps: Is Security Wreaking Havoc?
Bhavans Love Summer
How I Went from Milking Cows and Pruning Fruit Trees to Writing Press Releases
5 Steps for Slideshare Success
Bhavans Share and Shop at Annual Freecyle Event
What Bhava’s 30x30 Workout Challenge Taught Me About Myself, My Teammates and Friendly Competition
Writing for Infographics
A Day in the Life
How to Explain to Your Friends & Family What You Do: A True Tale of the Struggle Faced by Those of Us in PR
Helping Tech Marketing Answer “So What?”
A Day in the Life
“Yes, And!”: 3 Ways to Harness Improvisation in Business and Your Life
Putting Bhavans on the Map
How to Write a Great Article
Design, Development and Writing? Sign Me Up.
Emeryville: One of the Other Cities by the Bay
Why Iteration Is a Designer’s Best Friend and Not the Enemy
5 Ways to Generate Buzz at a Conference Without a Booth
7 Breakfast and News Combos for a Perfect PR Morning
Hello. My name is Chelsea and I am Content Specialist.
Bhava’s “Unofficial” Fitness Challenge of Summer 2014
Finding Harmony as a PR Pro: 3 Tips to Make It Less Elusive Than You Think
How to Articulate Your Goals and Achieve Them
5 Tips to Expand Your Company’s Brand Presence on LinkedIn
The 7 Steps That Can Solve Any Creative Problem
The Download: Bhava Design Internship
Persistence Pays Off When You’re Looking for the Perfect PR Job
My Golden Ticket to the 2013 HOW Design Live Conference
Shedding Light on the Art of SEO
Scan this: Tips for implementing QR codes in a marketing campaign
Design Hacking: A Design-a-thon
Mind the Gap: The Importance of Cross Platform Design for Attracting and Retaining Customers
Make Google AdWords Work for Your Business Without Burning a Hole in Your Pocket
Bhava Color Run
How To Create Great Online Video Interviews for Business
Marketo User Summit 2012: Getting a Closer Look at What Works
Three “Zen Workplace Habits” to Help Navigate Change
PR in the Field: A Glimpse of SuiteWorld
13 Rules for Taming the Email Monster (We Call Ours Raul)
UX vs. SEO or UX plus SEO?
How We Became Bhava
Archive
TOP