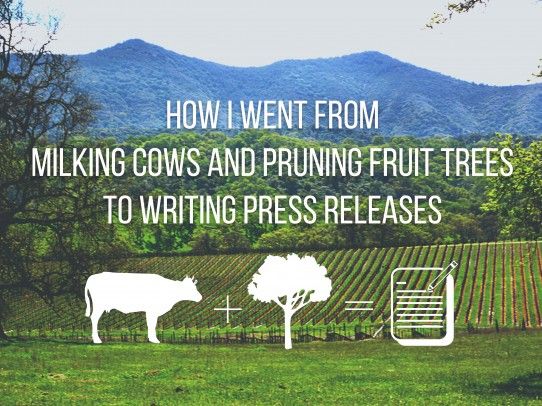 Most people have never heard of agricultural communications. When I first declared it my major at Cal Poly San Luis Obispo, even I wasn’t sure I fully understood what I was getting myself into. A family friend had recommended the major to me, saying it was “a great way to get communications experience with a little agriculture mixed in.”

Whenever I told people I was studying agricultural science and communications, I’d literally hear things like: “So that’s basically talking to cows, right?” and “How come you aren’t wearing cowboy boots and a Carhartt jacket?”

Teasing aside, I’d always dreamed of working in communications and figured this major was my way in. Even though the only thing I knew about agriculture was that my hometown happened to be in one of the most popular wine country regions in the state, I was intrigued by the idea of studying agriculture, an industry I thought I could learn a lot from. So I took a chance. I figured I’d learn communications, and pick up some basic knowledge about plants and animals and maybe some wine tasting skills along the way. Wrong.

In my time at Cal Poly, my major demanded that I drive a tractor, study walking stick bugs, make cheese and ice cream from scratch, design newsletters, write articles and create PR campaigns. I even took up line dancing as a hobby and missed President Obama’s 2009 inaugural address because I had to prune rose bushes for class credit. I learned a lot about different agricultural industries while designing, writing and reporting about them.

As my college education evolved, I started taking more communications classes and began to focus more on my passion for PR, knowing it would give me the same behind-the-scenes thrill as agriculture, but with a little less dirt. I was drawn to the idea of working in a field that many people don’t understand or realize exists, but is an integral part of many businesses’ success. By the time I graduated, I had begun to understand how to help companies effectively tell their story, and as a result, landed my first PR internship in San Francisco.

Surprisingly, my education in agriculture and my education in PR have a lot of similarities. In B2B enterprise tech (which I live and breathe every day now), several of my clients power the backend technologies that consumers use on a daily basis. In agriculture, farmers and ranchers are the behind-the-scenes source for how food ends up in the grocery store or on the dinner table.

In agriculture, I was always surprised by the range of fields (pun intended) I was exposed to and I never experienced the same day twice. I tried my hand at everything from testing plant soil to basic woodworking to designing layouts. At Bhava, I work with companies in spaces such as DevOps, mobile analytics and online video delivery—and once again, I never do the same thing twice.

Though my work process no longer involves gloves or a shovel, I still have an opportunity to get my hands dirty in PR. Bhava is a unique agency that empowers employees at any level to get down “in the dirt” and take on projects that interest them. For example, my job consists of diving into the weeds of writing press releases, managing media relations, submitting speaking opportunities, developing strategic PR plans and creating the occasional InDesign project.

While I may never milk a cow or rototill a field in a John Deere tractor again, I will always cherish those experiences for giving me a eye-opening look at the vital and complex Ag industry that the average consumer doesn’t know much about—and for inspiring me to pivot into a life of PR, where the behind-the-scenes work we do also carries significant influence.

Tech Journalists Report on the Best Way to Work With Them – Observations From Tech Reporter Panel
With Philanthropy as a Core Value, Club Phil is How Bhavans Give Back: Part 2
It's Teacher Appreciation Week: How Our Favorite Teachers Inspired Us
With Philanthropy as a Core Value, Club Phil is How Bhavans Give Back
How to Choose Between Blog Posts and Contributed Articles
Four PR Tips for Gaining Mindshare in Artificial Intelligence
Bhava and PRSA Co-Sponsor Timely ‘Diversity, Inclusion & Women in Tech’ Media Event at The Battery
The Journey to B2B Tech PR Via a Pitstop in Politics
How to Have Your Cake and Tweet it Too: A Practical Guide to Balancing Your Personal and Professional Voices on Twitter
What the Smash Hit Musical Hamilton Can Teach You About Working in Enterprise Tech PR
Reflecting on a Gold-Medal Year at Bhava
Rockin’ Around the Bhava Tree: How We Spend the Holiday Season
The Metagraphic: An Infographic on How to Make an Infographic
Digital Transformation Top of Mind at PagerDuty Summit 2016
One Giant Step for Open Hand
Brace Yourself… Conference Season is Coming (Well, It’s Already Here)
From Political Science to Public Relations
The DevOps Force Multiplier: Competitive Advantage + Security
The Five Ws of Pitch Worthy Press Releases
Seven Legit Ways to Hit it Big in Vegas with Your Black Hat News
I Am Twitter and So Can You!
Top 10 Areas of Mastery for a Successful PR Campaign
Bhava Means Business .... Press
The Five Horsemen of the Internet Apocalypse — Scam, Extortion, Embarrassment, Theft & Death
In Rugged DevOps, Actual Human Interaction Really Matters
Murphy’s Law Comes to DevOps: Is Security Wreaking Havoc?
Bhavans Love Summer
5 Steps for Slideshare Success
Bhavans Share and Shop at Annual Freecyle Event
What Bhava’s 30x30 Workout Challenge Taught Me About Myself, My Teammates and Friendly Competition
Writing for Infographics
A Day in the Life
How to Explain to Your Friends & Family What You Do: A True Tale of the Struggle Faced by Those of Us in PR
Helping Tech Marketing Answer “So What?”
A Day in the Life
“Yes, And!”: 3 Ways to Harness Improvisation in Business and Your Life
Putting Bhavans on the Map
How to Write a Great Article
Design, Development and Writing? Sign Me Up.
Emeryville: One of the Other Cities by the Bay
Why Iteration Is a Designer’s Best Friend and Not the Enemy
5 Ways to Generate Buzz at a Conference Without a Booth
7 Breakfast and News Combos for a Perfect PR Morning
Hello. My name is Chelsea and I am Content Specialist.
Bhava’s “Unofficial” Fitness Challenge of Summer 2014
Finding Harmony as a PR Pro: 3 Tips to Make It Less Elusive Than You Think
Content + PR + California = A New Chapter in the Bay Area with Bhava
How to Articulate Your Goals and Achieve Them
5 Tips to Expand Your Company’s Brand Presence on LinkedIn
The 7 Steps That Can Solve Any Creative Problem
The Download: Bhava Design Internship
Persistence Pays Off When You’re Looking for the Perfect PR Job
My Golden Ticket to the 2013 HOW Design Live Conference
Shedding Light on the Art of SEO
Scan this: Tips for implementing QR codes in a marketing campaign
Design Hacking: A Design-a-thon
Mind the Gap: The Importance of Cross Platform Design for Attracting and Retaining Customers
Make Google AdWords Work for Your Business Without Burning a Hole in Your Pocket
Bhava Color Run
How To Create Great Online Video Interviews for Business
Marketo User Summit 2012: Getting a Closer Look at What Works
Three “Zen Workplace Habits” to Help Navigate Change
PR in the Field: A Glimpse of SuiteWorld
13 Rules for Taming the Email Monster (We Call Ours Raul)
UX vs. SEO or UX plus SEO?
How We Became Bhava
Archive
TOP